Gingivitis is the mildest form of periodontal disease. It causes the gums to become red, swollen, and bleed easily. There is usually little or no discomfort at this stage. Gingivitis is often caused by inadequate oral hygiene. Gingivitis is reversible with professional treatment and good oral home care.

Untreated gingivitis can advance to periodontitis. With time, plaque can spread and grow below the gum line. Toxins produced by the bacteria in plaque irritate the gums. The toxins stimulate a chronic inflammatory response in which the body in essence turns on itself, and the tissues and bone that support the teeth are broken down and destroyed. Gums separate from the teeth, forming pockets (spaces between the teeth and gums) that become infected. As the disease progresses, the pockets deepen and more gum tissue and bone are destroyed. Often, this destructive process has very mild symptoms. Eventually, teeth can become loose and may have to be removed.

There are many forms of periodontitis. The most common ones include the following.

Causes — In most cases, periodontitis begins with plaque — a sticky film composed mainly of bacteria. If left untreated, here’s how plaque can eventually advance to periodontitis:

Risk factors — Factors that can increase your risk of periodontitis include:

Periodontitis is a bacterially induced infection that destroys the bone and other tissues that support the teeth.  If left untreated, periodontal disease will ultimately lead to tooth loss.  The disease has been called “pyorrhea” in the past as well as “gum disease.”  According to the National Institute of Health, the number one cause of tooth loss in U.S. adults is periodontitis.  It is estimated that 90% of the U.S. population is affected by some form of periodontal disease.

Periodontal disease is often referred to as the “silent disease” because more often than not, signs and symptoms of the disease may not become evident until its too late.  Some of the symptoms may include:

To provide you with a better understanding of periodontics, we have provided the following multimedia presentation. Many common questions pertaining to periodontics are discussed. 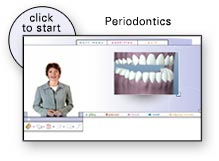 The lack of symptoms is one of the reasons so many people have undiagnosed periodontitis.  We have seen numerous cases of severe bone loss that exhibited no signs of inflammation and where no pain was present for the patient.   Don’t let periodontal disease take away your smile and function.  If you have any of the symptoms, please seek the treatment you need and help save your natural teeth.  Call us for an evaluation today!